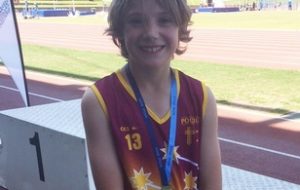 Wednesday the 14th   10:30AM heat – “All competitors in the 100 meter under 8’s please come to the marshalling area”. As soon as I heard the announcement the nerves hit me like a sledge hammer.  I looked around and saw the other competitors in their spikes and fancy running ‘skins’. I had the polding shirt and my school shorts on – “man this is going to be tough” I thought.

When the gun went off it took at little time to find my rhythm but with 15 metres to go, I felt strong and confident and powered away, I left the other competitors in my wake winning by 10 metres.

Next came the semi-final at 1pm. Again the nerves took over my body and I began to question whether I belonged here, in this event with all these great athletes who train and dedicate many hours a week to athletics. I put all the negative thoughts to the back of my head and took my mark. All the positive thoughts came rushing back to me as I took off from the starting line and was neck and neck with one other competitor. As we approached the finish line his experience showed as he bobbed his head down and beat me by .02 of a second!

Although I finished second, I was still a little devastated – my attitude is that 2nd isn’t good enough! I only needed to try a touch harder and I could have won. Lucky for me I had the final to come and I promised myself I’d do everything I could to win!

Thursday the 15th of October, after a good night sleep and a healthy breakfast, I headed back to Homebush for the final of the 100m 8 year olds. I got called to the marshalling area over the loud speaker and headed down. Although I was nervous, I decided that I would enjoy the occasion, the challenge and give it my all. I lined up in lane six with the competitor who beat me in lane five. The gun sounded and we were off, it was neck and neck all the way but I knew if I could find one last effort, one more powerful stride I could come away with the victory. I gave it my all and lunged for the line. The camera flashed and looked around. I had no idea if I had won, the officials came to me and told me that they had to refer to the photo of the finish as it was too close to tell. After reviewing the footage the officials told me that I was the winner! Under-8 State Champion for the 100 metres event. I was so proud standing on the podium as I received my Gold Medal!

I would like to thank my mum and dad for their support, advice and encouragement. My sister was alright too (thanks Stella)!

On behalf of the Sacred Heart community I would like to congratulate Dylan and his family for the fantastic result! Dylan’s wonderful sportsmanship, modesty and humility is a reflection of the way he has been brought up by his parents. He thoroughly deserves all the success and accolades he receives.