The prominent corner block of Bobbin Head Road has been host to Catholic schools for over 100 years. 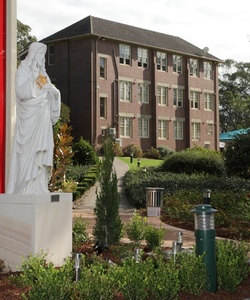 The property, first owned by the Sisters of Mercy, was home to a private boarding college, managed by the Sisters, for girls from Years 5 to 10 (formerly Leaving Certificate).

Due to the numerous additional commitments of The Sisters of Mercy throughout the Sydney Archdiocese, they were unable to retain the large property at Bobbin Head Road. As such, it was necessary for the property to be sold, and the first option was given to the Sacred Heart Parish on the adjoining property on Richard Porter Way.

The Sacred Heart Parish also owned the corner block on Telegraph Road, which was home to the original Sacred Heart Catholic Primary School for Kindergarten to Year 6.

After the parish had purchased the property on Bobbin Head Road, it became necessary to close the Secondary Grades (yrs 7 to 10) and the Boarding school of the Sisters of Mercy, on account of the implementation of the Wyndham scheme in the 1960’s. As a result, Grades 3 to 6 of both schools combined to the property on Bobbin Head Road and became Mount St Bernard School. Kindergarten to Year 2 remained at Telegraph Road as Sacred Heart Catholic Primary School.

The Parish then undertook an extensive building plan to be able to eventually house all the students on the single property at Bobbin Head Road.

Also at this time, the Mercy block was renovated to establish the ground floor as a library, and the first floor for staff and administration. The second floor became a multi-purpose area useful to both the Parish and school communities for meetings and other various activities.

The Sacred Heart Block, which is the current location for our junior primary classrooms, was opened in 1983 and refurbished in 2001.

The Marian Hall was built in 1987 and is still used for most whole-school gatherings as well as for parish, community and school related functions. The Marian Hall was also used as the temporary parish Church in 1991 while the new Church was being constructed.

The school continued as Mount St Bernard’s until 2001 when it was renamed as Sacred Heart Catholic Primary School to better align itself with the Sacred Heart Parish.

The school grounds have continued to undergo many changes, for many varied reasons, including growing student numbers and the ever-changing needs of schools in the 20th Century.

The most recent development was in 2010, as a result of the Building Education Revolution (BER). Sacred Heart secured a government grant of $2.5 million to build a new administration block, as well as refurbishment of the existing Mercy block into classrooms for Years 4, 5, 6 and a Music room. The administration block houses the staff and administration area, the Library, as well as toilet amenities and an undercroft area that is used as an additional meeting area for school and parish.

In 2010, the pool was fully refurbished. The heated indoor pool, managed by Aquabliss, is now open yearlong and provides swimming lessons to Sacred Heart students as well as members of the broader community.

Facilities and grounds of the school continue to be enhanced to better accommodate the students, staff, parents and the community.